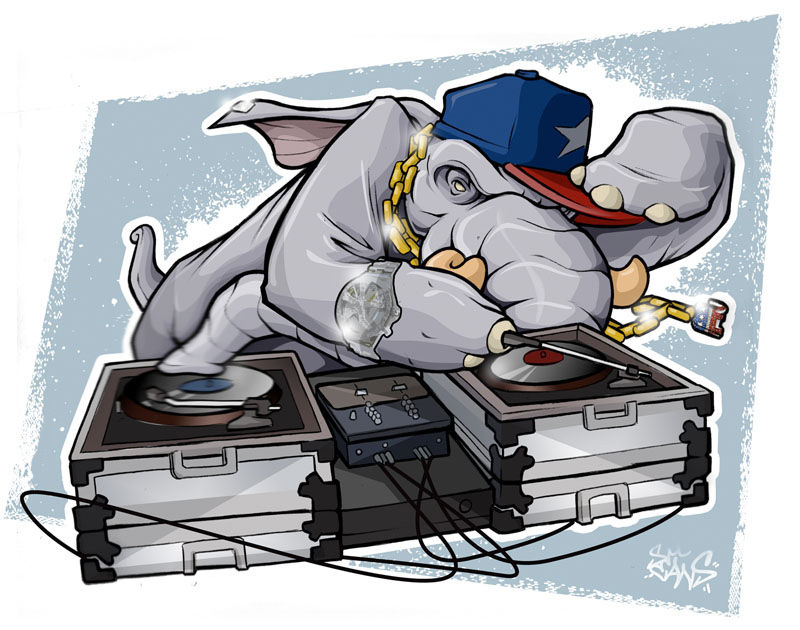 A Republican becoming a rapper would be like like Ben Carson running on the GOP ticket for president. No one would ever see it coming, it’s like a bad joke gone awry, and it leaves everyone sad and confused. The whole time Carson was running I expected Sacha Baron Cohen to unzip his Ben Carson suit in the middle of the debates and yell “surprise!”, revealing that the real Ben Carson was just locked away somewhere working on Gifted Hands 2.

However, the more I’ve thought about it the more I realized that Republicans have many similarities with some of the worst parts of hip-hop culture, a culture I love but  also have a few hangups with as it continues to evolve. Here are some similarities and even ways the two could feed off one another.

Rappers try to keep their circle small as Drake exclaims in his song, “No New Friends”. The refrain in the chorus goes, “F*ck all y’all ni**as except my ni**as”, which is essentially Trump’s policy towards Mexicans, refugees, and muslims.

Rappers often use words like, “b*tch”, “hoes”, while talking about how badly they treat their baby mommas. Republicans on the other hand are the reason there are so many baby mommas in the first place because they restrict adequate female-focused healthcare.

You would think the NRA would be blasting hip-hop while simultaneously blasting their guns in the air at their meetings. “9mm Goes Bang”, “Man’s Best Friend”, A Ni**a Witta Gun”, “Bang Bang”, “Heat Under The Baby Seat”. These are either popular rap songs about guns or bed-time songs of the Tea Party. Regardless, the gun obsession is real among both groups. Now if only rappers could learn from Republicans to actually register their guns.

C.R.E.A.M (Cash Rules Everything Around Me) is the name of the game for hip-hop while the Republican party typically swings to favor the top 1% with appeals for flat taxes and reduction of welfare benefits. Romney notoriously dismissed 47% of voters in 2012. On the opposite end, Donald Trump adorns buildings he owns in so much gold that 2 Chainz would be jealous. One of my favorite songs has a quote, “Look at you, now look at us…all my ni**as is rich as f*ck”. That’s either Lil Wayne or Ted Cruz at a private dinner party and Trump at a public one. However, rappers seemed to have embraced Republican “trickle down” economics by making it rain on a regular basis.

Talking About Their Dicks

Really? Have we really come to this? Hip-hop is traditionally dripping with masculinity and bravado (looking back, “dripping” may be a poor-choice of words considering the topic…but we’ve come this far so looks like we just need to finish). It makes sense that there are lyrics like, “I pray my dick get big as the Eiffel Tower so I can f*ck the world for 72-hours”. However, if either Ted Cruz or Trump becomes president then they’ll be f*cking the world for much, much longer than that.